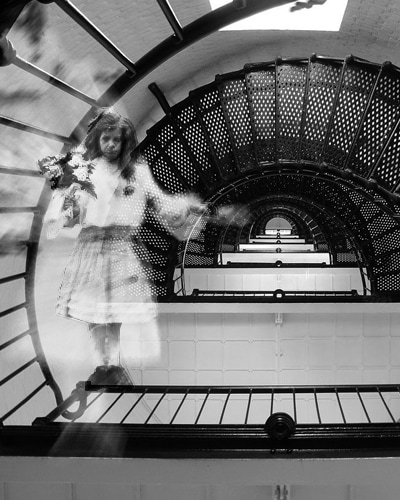 I tiptoed behind the stand, praying my face wouldn’t brush the sunglasses. Zander tugged at my waist, pulling me out of view. It was what I’d always wanted, this beautiful boy’s golden arm hugging me tight. But dread won out. The sunglass tower was the only thing between us and the man with the sword, which he was pressing against the merchant’s neck. I’d never been in a holdup before. It was the last thing I expected in this busy convenience store on St. George Street. This was one of the busiest tourist areas in St. Augustine.

If he pierced the cashier’s neck, her blood would splash onto the counter, and we’d be next. I could see his faded jacket and thick, pasty arm. I exhaled as he drew the sword high above his head, slashing the lottery tickets tacked to the sides of the counter.

The woman behind the counter twitched. Her yellow hair was blonde and stick straight like hay. Her face was creased like a dried apple, a Florida native, for sure. “I’m tryin’ to open the drawer, sir, I’m askin’ you nicely, be patient, the lock is stuck,” the woman’s voice was as thin as newly formed ice, ready to break any second. The drawer popped open; the merchant pushed bills across the counter, but her gaze stayed locked on the ground.

“Qu’est-ce que c’est?” the man asked, stabbing the money with the tip of his sword. This man was speaking French, and he’d uttered one of the only phrases I knew: What is this? Clearly, the swordsman was confused by the cash. He turned and pointed his weapon at Zander and me. We’d be stabbed by a crazy man, right here behind the sunglass tower. Zander held onto me as we crouched - attempting to disappear into the corner. The only good thing that could come of dying would be to reunite with my mom. We’d be able to garden every day together, just like we used to. We’d be in peace, among the butter beans and okra. The swordsman took a step towards us. Zander maneuvered in front of me, pulling me close. Yesterday I would have given anything for that kind of intimacy- anything but this. Zander’s hand shielded my head, and I wrapped myself around him. I heard boots cross the floor - toward the door.

​That meant “Oh, shit,” the other French phrase I knew.